This summer is rife with weddings. On Saturday the 22nd, my friends (and guildies) Mikey and Tracey got hitched! It’s been a while since he told me he got engaged, but the day finally came and I was very flattered to be invited. Especially since we’ve never met in person! All our interaction has come from some gadget invented to keep the human race in contact with its brethren. Mikey and I met in FFXI where he joined my guild (Catalyst) as a dragoon and we’ve been friends ever since. So this past Saturday I took a Greyhound bus down to Dayton, OH to celebrate one of the happiest days of their life.

I met my cousin Ellen at the Greyhound station where we proceeded to hang out around the Dayton area before heading to the Beavercreek Golf Club. I was still in my civvies, so I had to change into my fancy pants at the club. It was a beautiful day, and upon arriving I took note of the gazebo with chairs set up in front of it. I was glad the sporadic torrential downpours that seemed to be following me didn’t hit the golf club. I finally saw Mikey in the flesh, and it was not really too awkward. As I explained to some other guests that were talking to me during the wedding, the only real difference is that I could punch him if he got too rowdy.

I met Mikey’s Mom and a good number of his relatives prior to the ceremony. His mom saw me as I was surveying the banquet hall, and introduced herself. I replied in kind, and her face lit up and exclaimed that “You’re Elmer! You’re famous!” I was a little bewildered, but I started being introduced to various family members and it was explained that I was Mikey’s online friend. I met his brother, a couple of his cousins, and of course (allegedly) favorite Uncle Ron, although Uncle Dennis contends that he is the favorite. We’ll leave Mikey to settle this bout at another time. I was kind of expecting to just go through the wedding mostly unnoticed, well at least until the dancing started, but everyone was very friendly and I was happy to meet everyone and chat with everyone.

Around 5 PM, we were ushered outside into the sunlight to witness the joining of these two in a wonderful ceremony. I was in back taking video and cursing myself for not bringing my tripod in favor of convenience on the Greyhound. I was videoing so I had Ellen take a lot of pictures for me, but the ceremony remains in my head as a succinctly sweet and loving affair with plenty of tears (of joy) to go around. I was very pleased that A) Tracey came out to Coldplay’s Clocks and B) there was no reading of Corinthians 13. It’s interesting to see the personal touches that every wedding has, and this wedding was no exception. Mikey and Tracey had a “Boxed Wine Ceremony” which I at first took to mean they had some kind of fond memory over Franzia or some such wine. But what they ACTUALLY meant was they were putting a bottle of wine into a box, to be sealed for five years and then replenished for every 5 year anniversary after that. Inside they also wrote a note to each other that would be sealed with the wine, and finally the parents of the bride and groom also had written a little note that was sealed in the box. I thought this was great, and I hope that when they read the letters in 5 years, they are both bawling from how touching all the letters are. 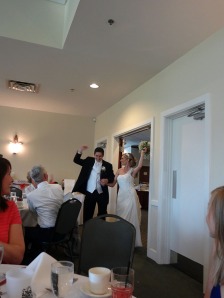 After about 30 min, Mikey was finally able to kiss his beautiful bride and now new wife! We then retired to the banquet hall to eat and witness some wedding traditions. Most of this I have on video, and with our newlyweds’ permission I will post the video somewhere for their relatives to see. There were first dances, dances with parents, bridal party dances, and there was a moment during dinner when Grandma had me stand up (presumably to point out who I was to other grandma, or so I had thought) and announced to the room that “This is Elmer. He’s known Michael since Michael was 14, and they’ve never met until today.” After recovering from a short daze, I waved to everyone and thanked them for having me. In retrospect, I should’ve done the Queen’s wave.

One of the cooler things that I haven’t seen before is the dollar dances. They had the best man and maid of honor go around and collect dollars and then you got to dance with the bride and groom. The money was collected as additional spending money for their honeymoon in the West Caribbean. Also great (and on video) is Mikey’s removal of Tracey’s garter with his teeth. Expertly done sir.

(Check back tomorrow the 26th, I’ll post one or two more pictures of Tracey, Mike, and I in a game too! Just got to get it off my computer at home.)

After all the traditions and eating finished, it was time for the party! And boy did we party. I’m pretty sure a lot of people thought I was drunk even though I stopped drinking at dinner’s end. But what can I say, I just know how to cut loose haha. I always have a lot of fun at weddings, and I always love dancing with anyone and everyone. I met a lot of people and I really hope I’ll see them again at one time or another. Y’all are always welcome to come visit in Michigan! While parting was bittersweet, I hope to see them again in the future. What an amazing and friendly family, and all they’ve done is double all that greatness. My best wishes to the Hitt and Codding families, and especially to the newlyweds that have joined not only themselves, but their families as well.