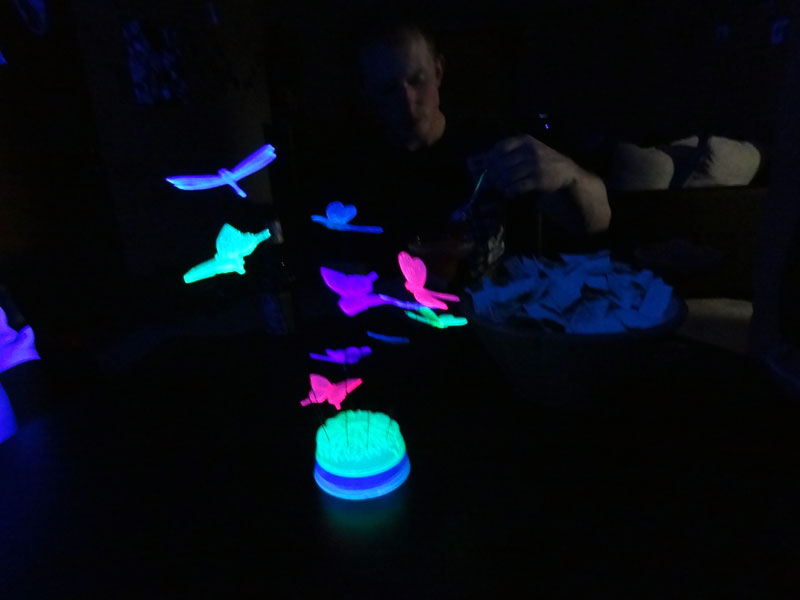 So Cinco de Mayo turned out very well. We all had a lot of fun. LaTonya had brought Solomon over; I haven’t seen him in a while so it was great to hang out with him.

We had bought a lot of marguerita stuff from Costco: 1.75 liters of 1800 silver  and a liter of pre-mixed pomegranate marguerita. Also bought 5 lbs of limes and 2 liters of marguerita mix. We had a delicious night.

Earlier in the day, I had bought anchors and screws for drywall so I could mount my speakers to the wall; however, I also had a black light that I thought would be fun to mount.

What ended up happening was I brought out a highlighter and we started having an impromptu highlighter party. People drawing on each other. Dante even changed into a white shirt so we could draw on him a little bit.

At some point I bought out my LEDs to do some light drawing. Just to mess around. We had fun.

Overall a great night with friends! Will was even able to show up! I had a lot of fun, and it was great seeing everyone. Gotta have fun with Jimmy before he heads back home. We’ll miss him 😦

It’s been crazy busy though with me almost getting my thesis and work ramping up. I have been doing pretty good with posting on Tuesdays though. Until this week, but I’ll have to get on another streak. After reading this article, I feel like it’s a good way for me to get into a daily habit of my Just Dance 3 exercising and writing these blog posts. I promised myself that at minimum I’d post once a week, and for my readers I was hoping to make it Tuesdays.

Oh, I have a new addition to the family. Seamus has new friends: A sweet basil plant and a mint plant that have yet to be named. Anyone have ideas? Let me know!