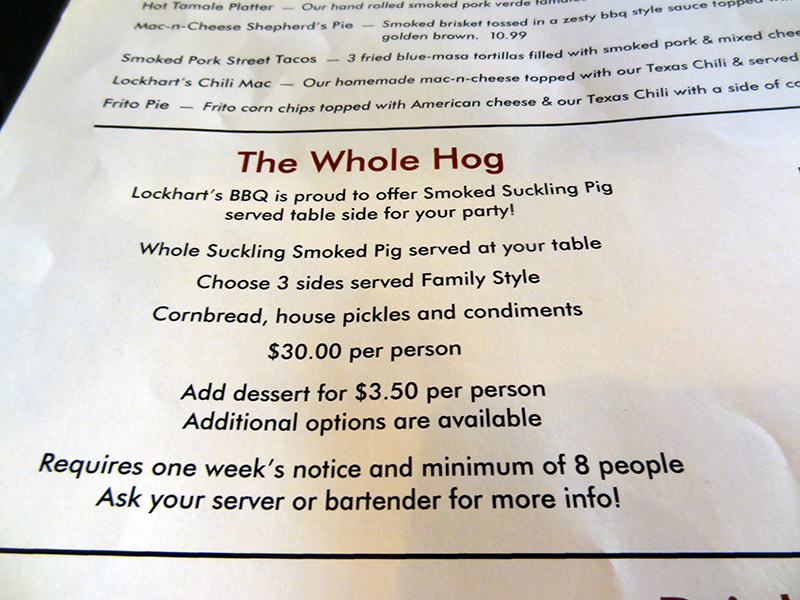 So on Monday I got a tweet from Lockhart’s BBQ inviting me to come take pictures and have a tasting of their new menu item – Smoked Suckling Pig. Unfortunately it was at 3 PM, right in the middle of the work day. I headed into work early on Tuesday, hoping to buy some extra time for lunch as I would have had to drive 34 min to get to Royal Oak. Lockhart’s ended up tweeting me that they were running late, so that helped a bit as it pushed my “lunch” closer to the end of the work day. It was a beautiful day out though, so it was a nice drive over there. I parked at John’s apartment, and since he was a regular there I didn’t think they would mind too much if I brought him; plus he let me park at his place so we could walk over.

When we got there Pitmaster Bubba greeted us at the door with a wave and a smile. He told us about his plans for the pig, and so we sat down at the bar while we waited. I still had to work, and John had to study so we both ordered waters. John ordered an appetizer of Burnt Ends to tide us over until the Pig was done resting. He also decided to order an entrée of the duck, which I thought was foolish as we were about to chow down on a 25 lb. pig but he ended up taking it home for dinner that night.

Pitmaster Bubba let me take some pictures of the pig in the smoker, and also I grabbed some great shots after they let it rest. He cut open the pig from the back and then proceeded to label it with flags, so that when the pig is served to customers they know what part is what. These flags are only a placeholder though, they have ordered real ones so expect an even better looking presentation! Just looking at how juicy and tender the pig was had me salivating. 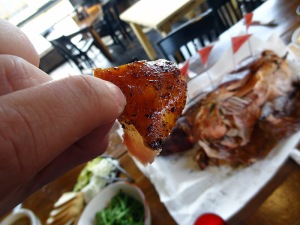 As you can see from the first picture of this post, the hog is served with your choice of 3 sides off the menu, cornbread, cornbread, house pickles, and condiments. I was only able to stay for about 15 min to eat before I had to head back to work, but I sat down at the table while everyone was bustling and ate a little of everything. They had chosen Mac & Cheese, Green Beans, and Jalapeno Beans for the sides and it was all delicious. These sides aren’t new to Lockhart’s, so I’ll focus on the hog. It was so tender and juicy. I tried a piece of meat from each of the four labeled regions, and while there were slight variations in the texture and taste I don’t  think my palate was sophisticated enough yet to adequately describe how they differed. All I know is it was a wondrous smorgasbord of delicious pork. Even the skin was delicious. I saw how crunchy it was and grabbed a piece and it was amazing. I told Pitmaster Bubba and he also tried some, and he remarked that he “knew what he was making. Pork Cracklins”. I am sad that I didn’t get to try some, but John stayed for an hour eating and said they were “fantastically crispy” and were reminiscent of pork rinds. Even after thoroughly eating the hog with the Lockhart’s staff, John remarked that not a single place of the hog was dry and even an hour after the pig was taken out of the smoker the food remained warm – it was all juicy and scrumptious. He was lucky enough to get a piece of the cheek which is supposedly one of the best parts. It was very tender and even a bit sweet.

Watching them cut up the hog, and prepare this meal was a special treat, and I even got to meet the owner. Everyone there is always great to hang out with, and I wish I lived closer so that I could frequent the establishment more often. If you find yourself with 7 other friends deciding on a place to eat in a week, give Lockhart’s a call and indulge in this culinary experience.

Now I just have to find 7 other people who want to go eat this with me. Any takers?