I invited the Yang’s and the Hsu’s to my house for a dinner party on Saturday. I haven’t spent a lot of time with the Hsu’s in a long time, and when I see them we never really have a lot of time to interact. I wanted to invite them before the Yang’s went out of town again so Saturday it was.

Learning from the last time, I spent a couple days putting together a reasonable and well-balanced menu. I was a little concerned that I might not have made enough food but by the end of the night, those worries were assuaged. I had a little too much meat in my last menu, so I added some more vegetables and only went for a couple main dishes that had meat. I knew I wanted to make Beef Wellington, and even though it didn’t really fit, I was adamant about making a seared tuna. Everything else kind of developed from there, with some inspiration from Masterchef.

As you can see, I ended up with a 7 course menu. I was not entirely sure how to serve it, since generally I think these types of dishes are served a la carte, but I just ended up putting everything family style. I also took this opportunity to practice my plating, but it definitely still needs work. Sarah plated the Confit Byaldi amazingly, I got to up my game.

Everyone wanted to know what they could bring, and what they could help with but this time I had my time management down. I had Sarah come early and help me chop some vegetables, and that helped immensely. I was very proud of myself. 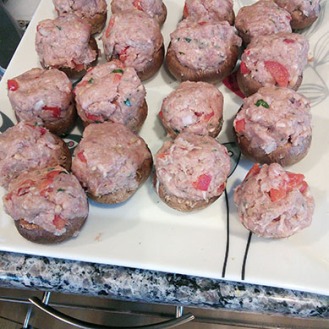 I had everything prepared to go into the oven, and it was all just a matter of timing. Everything ended up turning out delicious. Probably my best results for Beef Wellington and Seared Tuna ever. The brussel sprouts also turned out far better than I thought they would. The mushrooms were basically an afterthought that I just cobbled together with no recipe, and it was based purely on watching Jill making stuffed mushrooms once. I surprised even myself. Everyone was very impressed with the meal and were extremely full afterwards. I was beaming. 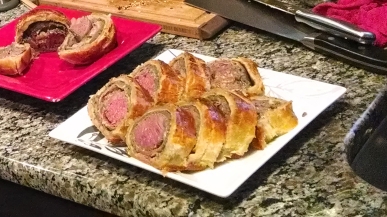 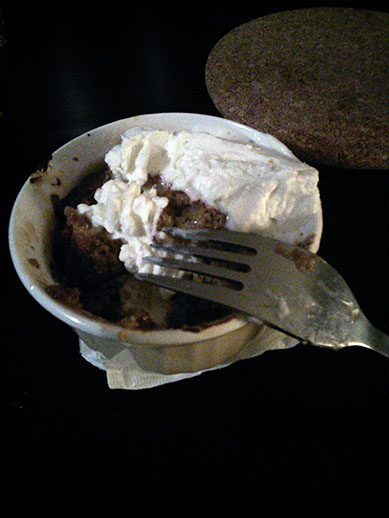 It was great to see Risa and Tiffany again! I rarely get to see Risa, and it’s nice to be able to hang out and talk to her over a satisfying meal. Overall it was a great night, and everyone left full and happy. At least I know who I can use as guinea pigs now whenever I want to try new dishes! 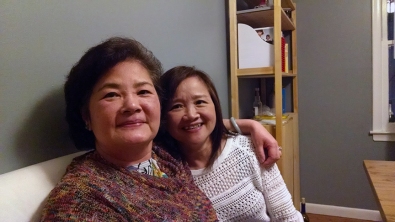 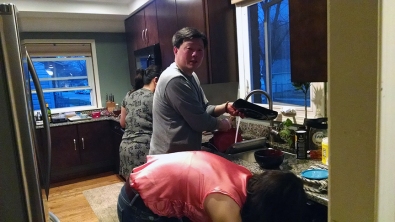 Sarah ended up staying at my place for the night and we made omelettes the next morning! Later on in the afternoon, we went for a run in the nice weather since she’s training for a marathon. I have been wanting to run more so I tagged along. I need to start running more regularly. We took as much of the leftover ingredients as possible to make some food. Ended up with more seared tuna (not nearly as good as the night before) and some Sweet & Sour Chicken.