This past weekend was Short’s Brewing Company’s 12th Anniversary party!

My parents were kind enough to let Pat, Dante, Will, and Lindsay come up with me to celebrate this awesome event. People appreciative of delicious beer.

Since the party wasn’t until 4 PM, my dad asked if Will and I wanted to play golf. Now Will and I haven’t played golf in a while, so we hit the driving range on Thursday before driving up. at 9:30 AM on Saturday, we headed out to test our skill (and luck). 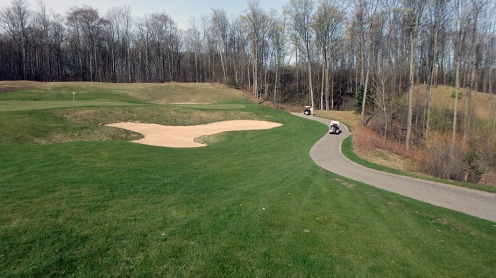 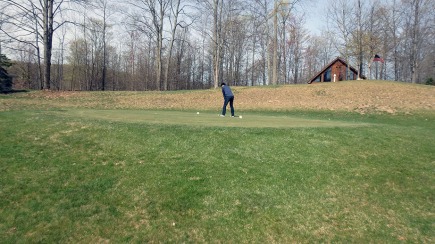 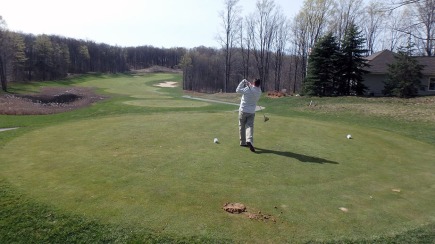 I was pretty pleased with my performance, having not played for 2 years I was ecstatic that I was fairly consistently getting 1 or 2 over par. Will had a couple great holes where he scored par and even one hole where he got a birdie! Four hours later we finished our game, and despite a handful of frustrating holes we had a blast! I definitely will be playing again with Will while downstate.

We regrouped with everyone and had some sandwiches that the rest of our group had brought back from lunch (while we golfed). Then got ready to head to downtown Bellaire. The line was ridiculously long, but it moved fast. We were inside the party area within ten minutes. 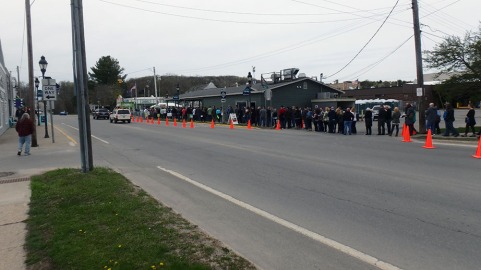 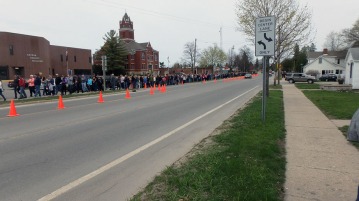 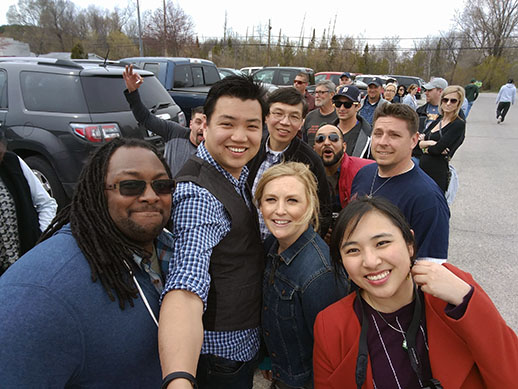 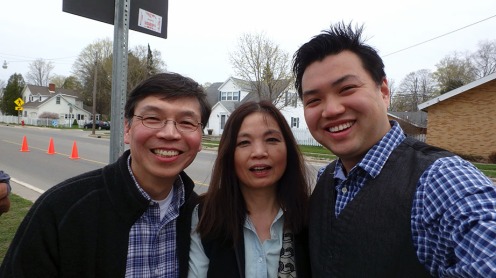 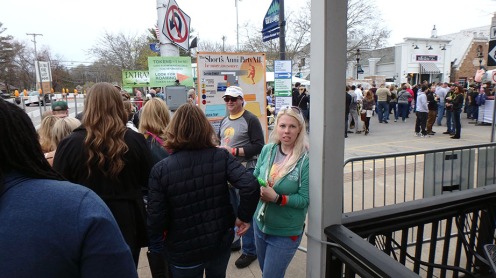 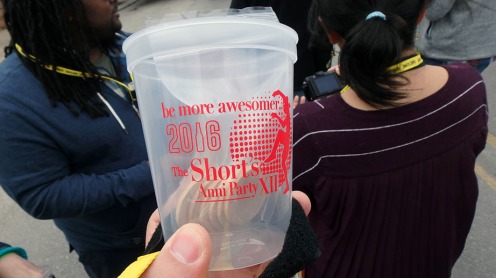 We proceeded to line up and grab our first beers. As the day moved along, we pretty much had all of the non-standard beers that they offered. My favorites were the #Hashtag Sportz and Melt My Brain. Melt My Brain was by far the favorite among our group and it was the first beer to tap out in the outside beer dispensaries.

We met up with a lot of family friends that were up there and our golf community neighbors. It was a blast! I also ended up striking up conversation with pretty much anyone and everyone I was standing next to in line. We stayed there for 6 hours, and it went by surprisingly fast. For having nothing to do but drink beer, listen to music, and hang out with friends both new and old, I was surprised by how quickly time went by. 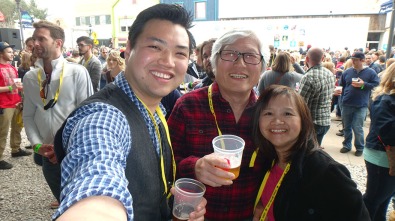 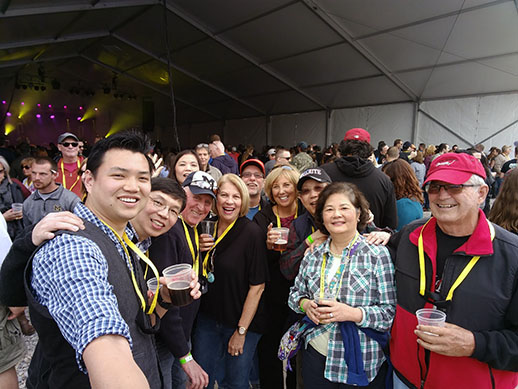 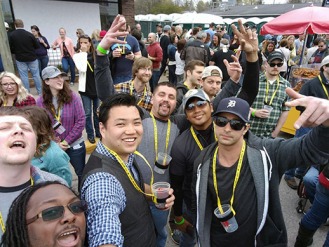 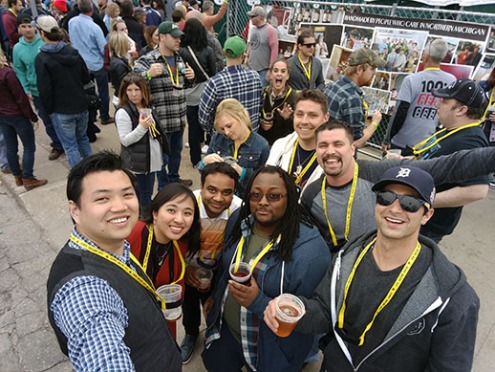 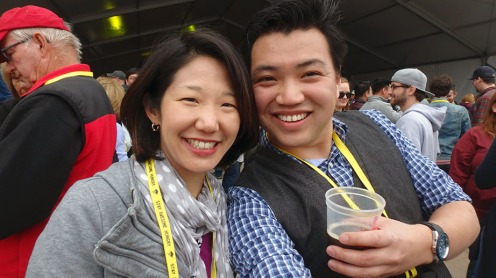 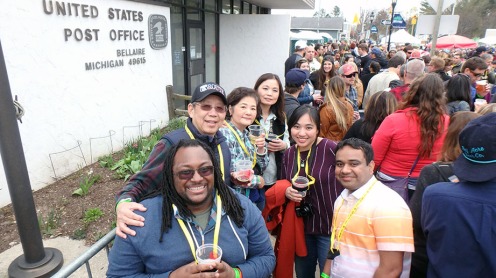 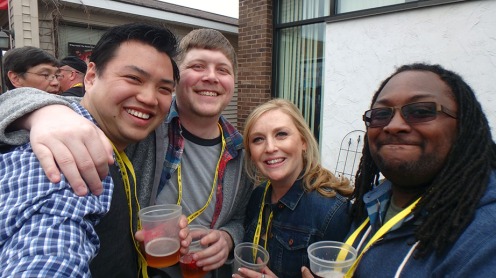 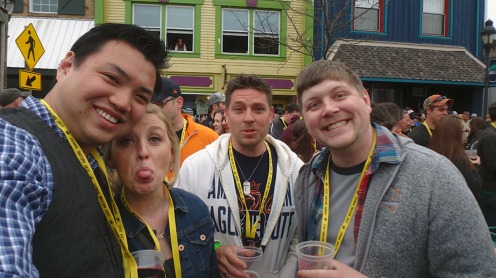 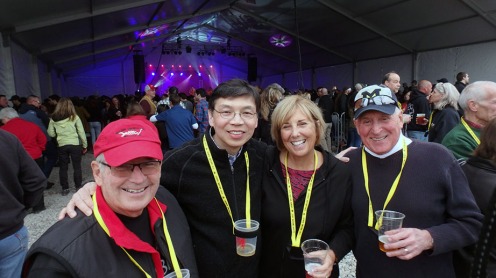 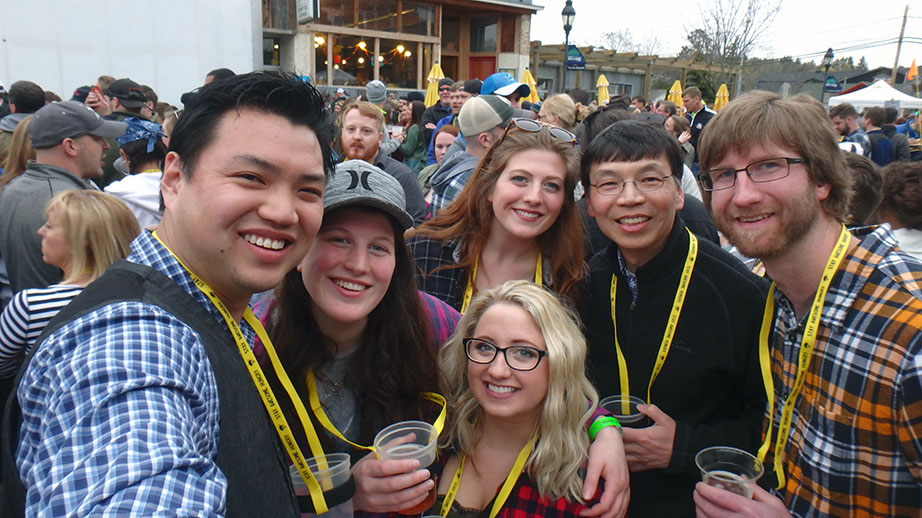 The entire event was treated to live music for its duration. When we arrived the Crane Wives were the up. Pat was extremely excited to see them, so we headed to the music tent and hung out there for a good amount of time dancing. 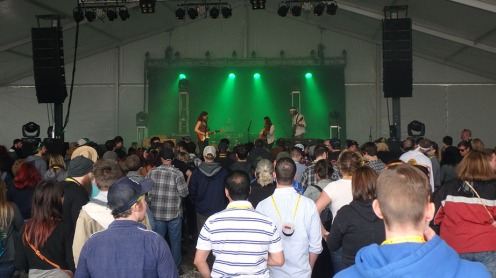 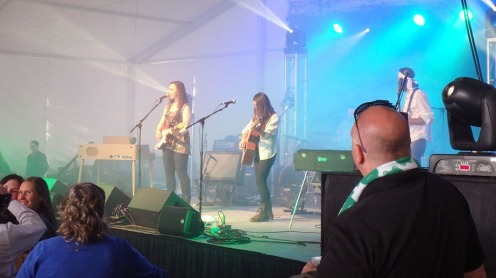 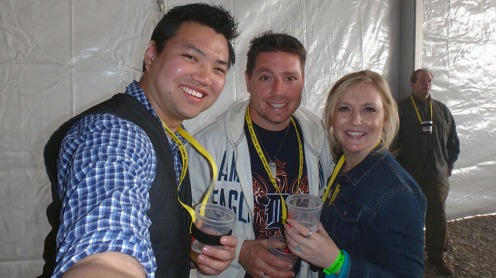 Vulfpeck followed in the evening. I never heard of them before, but I really dig their sound. 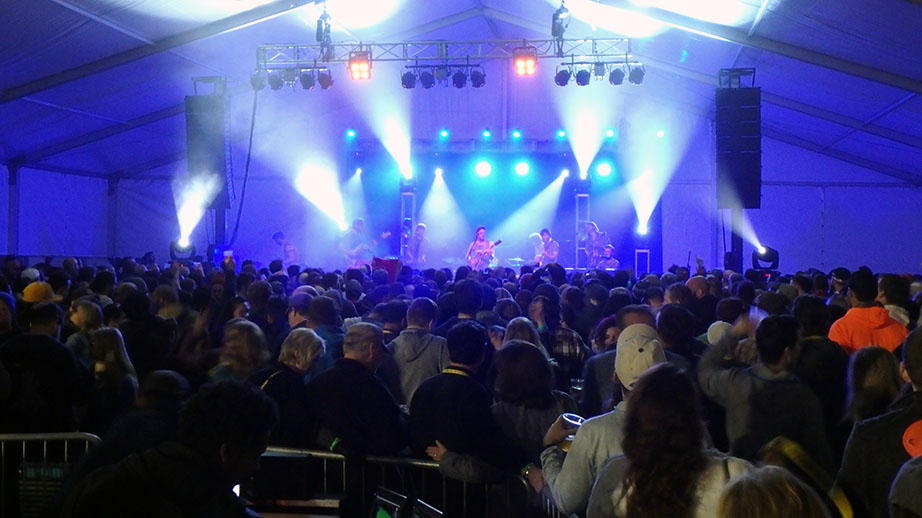 There was a variety of food at the event. The paella had the biggest draw for me and it was definitely worth it. There was also a BBQ food truck that I meant to try but just was too full to sample it despite my gluttonous tendencies. Also there was a pretzel cart and a hot dog/brat stand. I’m told by Pat the vegan dog they served was fantastic.

As the night drew to a close, we prepared to go home and rest. Will, Dante, and I picked up the Anniversary Ales we pre-ordered as well as the Vulfpeck Compression ale he was lucky enough to pre-order before they sold out. 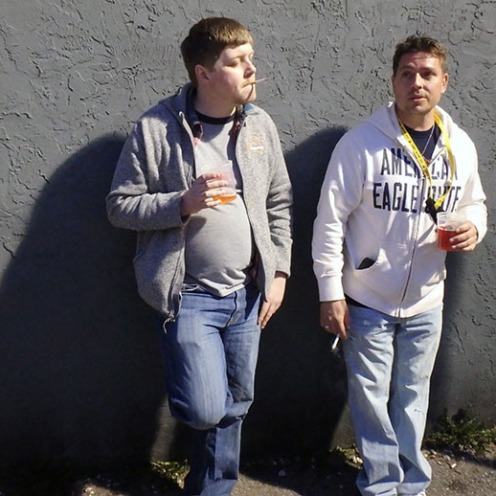 As we were gathering, I spotted Leah Short walking by and I flagged her down for a picture. She remembered my name! I’m sure the fact one of her children’s name being Elmer was helpful. One of my first memories of her is when we were in downtown Bellaire for the Rubber Ducky Festival in 2009. The previous week I had gone up with my parents to play golf, and we had stopped in Short’s. This week, I had left my ID because my parents told me I wouldn’t need my wallet. And when we stopped at Short’s I was disappointed that I wouldn’t be able to have any delicious beverages. My mom assured them that I was over 21, but it was Leah remembering me from the week before and having personally seen my ID that really pushed my eligibility to drink out of question. I’m quite surprised she still remembered me after all this time. Hopefully I’ll be able to find her at any and all future Short’s parties so I can take a picture with her each time.

I asked her if Scott Newman Bale was also around, and she said he was wandering around somewhere. Given the decreasing temperature I figured he’d be in the pub, so I headed in that direction. My intuition was rewarded and I had a short chat with him and also requested a picture. I also showed him the previous pictures with him that I had taken, and he recalled us taking it. I had a brief conversation with him before leaving him with his friends. I was glad I found him! Hopefully this will become a recurring theme.

When we got home, Lindsay and Dante went and grabbed us some McDonald’s while we taught Sarah how to play Euchre. She learned pretty quickly, and I can definitively say she now knows how to play Euchre. When I first checked the clock after the first few games, it was only 12:30AM. After the next few games, it was magically 3 AM. Needless to say we retired for the night at that point. 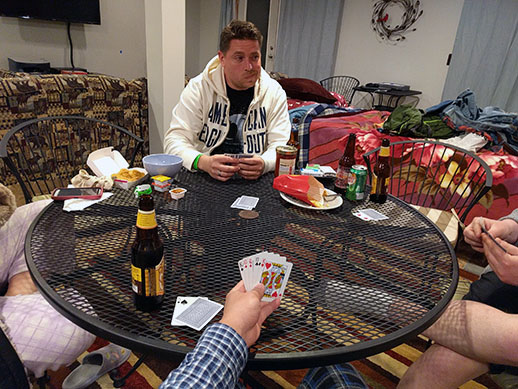 The next day we prepared to head back downstate, but not before we stopped at Short’s Mart to grab some souvenirs as well as some beer. Nearly everyone bought 1 or 2 six-packs of Melt My Brain. I also wanted to check out the new expansion they added, it was completed the day before the party and its first opening was the party itself!

It’s been really great watching Short’s grow to be the company it is today. I remember when my parents first took me here in 2006 after I turned 21. Since then it has been my favorite brewery. I had a blast, and I hope my parents will let my friends come up again next year.