I cannot believe how busy I’ve become. But one thing I’ve made sure to do is write this blog every Tuesday. I seem to have failed this week though. Since May 12th, I’ve had some kind of event every Saturday until Yesterday. First Cask Fest at Ashley’s in Westland; then Ann Arbor to take Will to the bars there and also hung out with my cousin Connie at various places in Ann Arbor; followed by Memorial Day weekend up north with Trevor and my family; then another vacation the following weekend to Carlsbad, California; and finally Ravi’s Graduation Party last Saturday that happened concurrently with the second Guild Wars 2 Beta. This Saturday I had nothing planned, although Lobsterfest was on Friday and we had some delicious food/beers. But this weekend I finally had a Saturday to just relax and not do anything. I did begin my writing for these posts though, and now I finish it on Father’s Day. Happy Father’s Day to all you fathers out there. 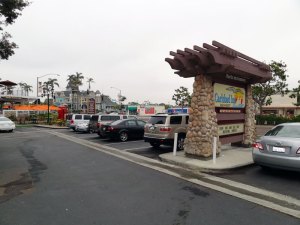 Neither of my cousins wanted to share the giant king-size bed with me. I guess they were afraid I’d roll over in the middle of the night and smother them with my fat. After waking up and getting ready for the day, we all headed to breakfast at the nearby Daily News Café. Part of my hotel package included free breakfast, which I had assumed to be just the continental breakfast at the hotel and that it was just for one day. Instead I was pleasantly surprised to find out that we received 6 vouchers for the entire duration of our stay and that it was for one of three restaurants in the area. We were allowed to order up to $11 and also get a coffee as part of the voucher. The portion sizes were enormous for breakfast, and we ended up not even eating lunch later on in the day.

After breakfast, the three of us checked out the beach and hung out there before Katnip and I decided to change into our swimwear and Oliver went to Starbucks to study for his finals the following week.

As we went back to the beach, we signed out some beach equipment that the hotel provided. Beach chairs and boogie boards primarily, though we could have also signed out Umbrellas and Sand Toys (denoted as S. Toys on the billboard). We both played in the water which was surprisingly warm. It was only 70° when we went out and the water was cold at first, but compared to lake water I feel like I acclimated to it much faster. We played with the boogie boards but neither of us really knew what we were doing. It wasn’t until the following day that I’d have any instruction on how to correctly catch a wave.

After we had our fun, we decided to explore the shoreline. We returned our equipment, and went back to the hotel room for another costume change. We proceeded to walk about 1 mile north along the shore, picking up cool looking rocks and sea shells. I even attempted to teach Katnip how to skip stones. We walked by some pretty awesome looking houses, many of which were for rent or for sale. Next time I come back, I may have to just rent one of those houses instead of the hotel. 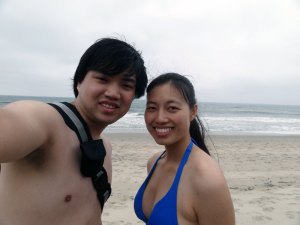 As we returned form our walk, our cousin had just finished studying; completely unplanned and uncoordinated but fortunate that we all arrived at the hotel in unison. We showered, got dressed in street clothes, and then explored Carlsbad a little bit before Oliver decided he was taking us to Old Town San Diego. I did demand that we stop by Jamba Juice first because I love it so much. Katnip had never had it before, so I led everyone to the Village Faire plaza where Jamba Juice was located.

We took the 5 down to San Diego, and explored Old Town San Diego. It was a pretty vast historic village. Lots of shops and restaurants all clustered in the area that California started. I ended up buying a majority of my souvenirs here, and also managed to snag some vanilla beans at the Rust General Store. They were pretty nicely sized for only 3 dollars a piece, a far cry from the price that Meijer and Kroger charges. After Katnip, Oliver, and I were done perusing the wares, Oliver led us to a nice, authentic Mexican eatery called Café Coyote. The food there was delicious: Katnip and Oliver ordered Tacos while I ordered Carnitas. Let’s not forget about the drinks though. They were awesome, probably one of the best Mojitos I’ve ever had in my life. One highlight of the menu was that they had a Tequila shot for 125 dollars. Looked interesting, maybe one day….

After we were stuffed full of delicious Mexican food, Oliver wanted to take us to this exquisite bakery located in San Diego. It was featured on Food Network’s “Best Thing I Ever Ate“, so we decided to make a stop. There were some amazing looking desserts there and I thought they were pretty reasonably priced. Especially for how delicious they were. I ended up buying a Pot de Creme, Creme Brulee, and a Lemon Bar. Katnip had a Chocolate Croissant of some kind and also a Lemon Bar.

As we returned to Carlsbad, Oliver dropped us off and returned to Irvine to continue his studies. Katnip and I were planning on going to check out some bars, but one of them had a cover and the other was super packed. The third one we were going to go in had a wedding party inside, and we ended up talking to some of them outside and just conversing with them for an hour or so. We never made it in, instead as our newfound friends headed to another pub to continue the night we went to the liquor store and got a six pack and sat on the beach listening to the Ocean and just recounting how awesome this vacation had been so far.

As you can see from the above picture, we are very tired, and sunburnt. But we had a great time.