What an interesting and busy Thanksgiving weekend! And I figured out what was causing my computer to shut down. I feel like I finally have some time to sit down and write about my Thanksgiving last week. I had to figure out how to get pictures off my camera, in the end I ended up using my PSP to retrieve the pictures. Then I managed to get Adobe CS6 on the computer to work, and was able to actually convert my pictures. ☺ I feel like I am more busy than I should be. Anyways on to the Turkey Day Weekend shenanigans.

So Thanksgiving came and this year I decided to make Beef Wellington for everyone to try. Other than the double stacked one which half was undercooked, it turned out pretty well. This time I wrangled the Phyllo dough properly. Thanksgiving was pretty traditional in terms of attendees: parents, Sarah, Ellen, Katrina, and Katrina’s parents. Just the right number. Refer to the pictures below to see our spread, and yes that is 油飯 (oily rice) don’t pretend you aren’t jealous. 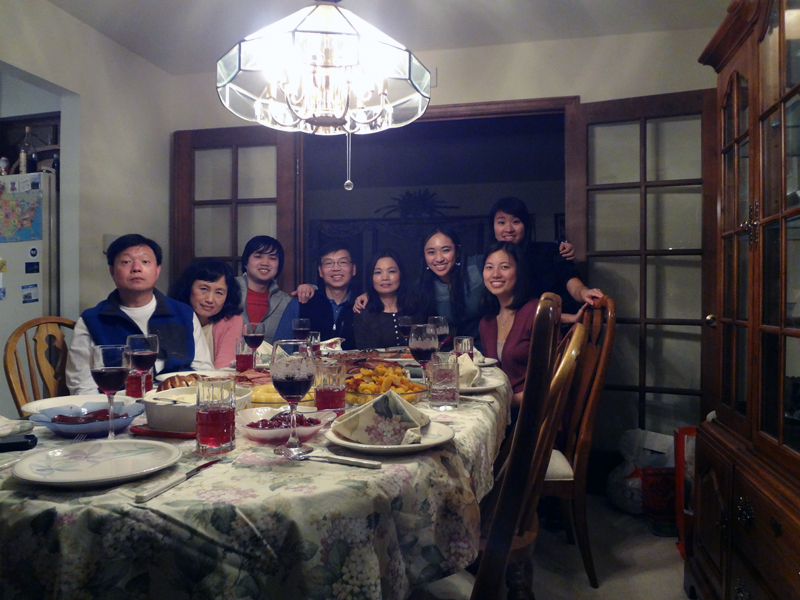 After dinner, we decided to go to Walmart at 10 PM so that Sarah could get a new TV since she has now destroyed two TVs that we gave her. Walmart was crazy. I emerged from the foray with a Waffle Maker that I planned on using later Friday night for Chicken Bacon Waffles. Chris and Dante also joined me for a journey into Kohl’s where I managed to get a blanket. A extremely cozy, cuddly, fluffy blanket. I am pleased with my purchase. Though I’m getting a little tired of black friday midnight sales. We stopped by Best Buy to no avail, so probably won’t be doing this anymore. I literally emerged with two items totaling under 20 dollars so….

After we returned home, we all slept and prepared for the festivities at night. My friend Luke drove out all the way from Kalamazoo to attend my soirée, it was awesome. Not much to say about it, typical Elmer party – drinks, friends, games, and good times all around. We played cards against humanity for a large portion of the night, then gangnam style’d for a short period, before we all just ended up socializing. Around midnight, chicken bacon waffles were crafted by Dante and I. For our first attempt they were not too shabby. The sauce will take some tweaking though. Luke and I started a firepit around which only he and I sat, but fire + booze is always a good combo as far as I know.

Thanks for stopping by.