So still failing on Tuesday posts. It got delayed one day cause I went to see John perform stand-up, then yesterday was a rough day at work so I just hung out with Dante and drank some beers. Check the following post for John’s performance!

So this past weekend was the lunar new year! So first off

I went home for the weekend to celebrate the new year with my family! So be prepared, this post is gonna be rife with pictures.

It’s the year of the snake! What does this mean? I didn’t know off hand, so I consulted some websites.

The 2013 Snake of year has ability to read complicated situation quickly in a controlled manner which is good for business. Signing documents of any kind requires very thorough attention. 2013 horoscope predict it is a good year to begin important detail work. Research and investigation are supported. The Snake has sneaky energy that can be to your advantage. Look for the holes in the loop. A new-found ambition to greatness will inspire you to be all you can be, and provide you with the follow through to actually achieve your goals, And, 2013 year of the Snake also supports added responsibility,
But 2013 Snake need to watch for fanatical commitments since Snakes inclination to spend money quickly than earn them may produce tensions in personal relationships. Create a safe space to work from this 2013 year. The Snake likes protection, needs to feel safe and secure to utilize its special analytical skills. This is the year to make headway in slow and methodical ways. Things will definitely be accomplished as you focus forward.

As an ox in the year of the snake, it looks like I’m going to have a pretty good year. So far my work life is reflecting that so I’m pretty jazzed. Supposedly according  to whoever wrote and published this page, I should stop being single this year. We’ll see how that goes. I don’t put a lot of weight on astrological horoscopes, but they are pretty fun to read. Plus, I don’t like to discount it; who can say if there isn’t something there.

Plus this site says:

Understanding and fair, these are the least unyielding of the Oxen and the most apt to change and accept new ideas. A more liberal attitude gives them the ability to appreciate the value of being a part of a team, and other members of the team respect the high principles of the Wood Ox. They are particularly self-confident giving them an air of unspoken authority. This characteristic means that Wood Oxen are often chosen as leaders or spokespeople. They also have a shorter fuse than other Ox people, and are more likely to be outspoken or to stand up in a crowd to be heard. These Oxen are quite devoted to those they love and make strong and affectionate friends and relations.

And my boss has been saying that I am leader. Coincidence? Probably.

For the New Year, I spent the eve with Sarah, my parents, and Katrina’s parents. Unfortunately Katrina herself was not in attendance because Med school is a bitch. We all made dumplings together, and then ate a lot of food. I mean just look at those pictures! I just hope I can make all of these in the next 2.5 years. That’s my goal.

For the actual New Year, we had the Lau family over. Recently Rosa has been helping me find a house, and we put in a bid that got accepted. Now we’re just waiting for the lawyers to see if the bank will accept the short sale. We invited their family over since Jen’s dad isn’t in the states a lot so it’s a special occasion that the entire Lau family was in town (on a side note, I finally found out what his occupation was after 20 years). We ate dinner (Mom made paella) and talked and in the end I made a dark chocolate soufflé.

It was all delicious, and it was great to see Jen again. Not a lot of people were nice to me growing up, and she was one of the few people that I’ve known since I was like 8 and was nice to me. So if you’re reading this Jen, thanks for being a great friend! 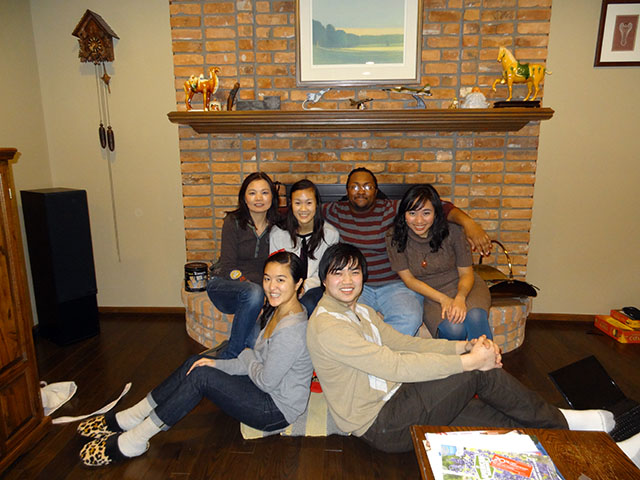 2 thoughts on “新年快樂 – Happy New Year – Year of the Snake”