Thanksgiving this year seems a lot more eventful, but a lot more mellow. It must be due to the lack of midnight Black Friday shopping, but more on that later. Prior to Thanksgiving some of my friends and family met up at Dragonmead Brewery to enjoy some mead and have sushi Thursday together (on Wednesday since I think Thanksgiving preempted Sushi Thursday). 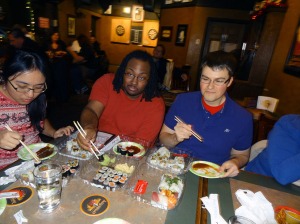 It was a pretty awesome turnout, and we probably were one of the few people to ever bring sushi into that establishment to eat with our drinks.

We all had a great time catching up, conversing, and no one took out their phones except for pictures! It was really glorious.

Katrina stayed the night at my place and we had a cousin night and caught up and instead of the romantic comedies we were supposed to watch, we ended up just vegging out Thursday. But as 5 PM approached, I frantically got the dish I was making for dinner (Dragon Balls!) ready to be popped into the oven when I reached my parents.

Sarah’s boyfriend joined us for Thanksgiving this year, and there was food abound. A good mix of traditional Thanksgiving food and some Asian cuisine thrown into the mix. After food there was pretty much a 3 hour long Just Dance 2014 fest on my PS4. It was a LOT of fun, and by the time midnight hit, we were all pooped. I originally didn’t plan staying the night, but I was so exhausted that sleep seemed much more enticing. Not much to say about Thanksgiving other than it was a blast, and it was great to see everyone again. The pictures speak for themselves.