Been a pretty slow week. But John livened it up with an invitation to the Royal Oak Food Truck Rally. I am usually pretty loathe to pass up a chance to eat Mac Shack, since I rarely am able to taste their cheese-laden delicacies.

Sarah joined us and we walked around to peruse the various offerings from the vendors. By the end of the night I had ordered my usual “Cluck Like a Buffalo” Mac & Cheese from the Mac Shack, and also got 2 tacos from El Guapo. Sarah and John got some BBQ from Detroit BBQ Company. 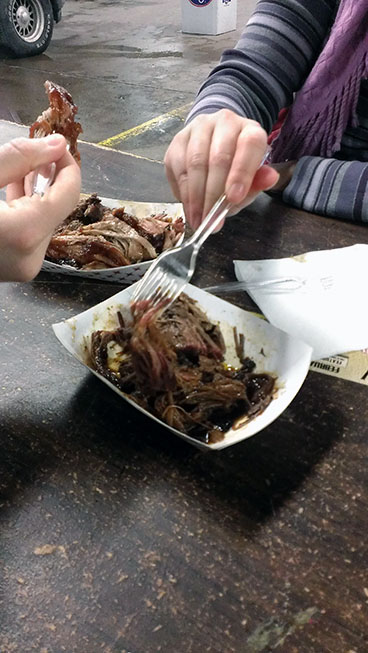 Definitely worth checking out sometimes. Food trucks are a delicious source of meals, I highly recommend them.

My laptop has started to cumbersome. It has almost no battery life (about 1 hour fully charged) and while it’s still powerful, it’s not really very useful if I have to keep it plugged in. Kind of defeats the purpose of a mobile computing device no?

I took this opportunity to grab a touch-screen laptop. For comparable power, portability, and battery life I found that the original Surface Pro (128 GB) had a really good price point. I missed the sale when they were only $500, but Best Buy had them for $600. I originally got a Sony Vaio Flip 14A Laptop because I really liked how the thing converted to a tablet. But I quickly found out that 14″ for a tablet is pretty large and slightly unwieldy. Also after a day the thing would go crazy when I converted it to a tablet. It acted like I was using the touchscreen and would open the start menu, select things, and other ghostly functions. Was unsure if it was my specific product or a general defect, but I reconsidered it for the Surface Pro which (even though it had a 3rd gen processor) has half the battery life (~3-6 hours) but more processing power. Really happy with my Surface Pro though. it’s super convenient.