So the it only takes me like 10-20 minutes to write these posts, and then another 40-50 to put up the pictures and format them in a way I feel is presentable. Luckily, this post doesn’t have too many pictures, but mostly that’s because Katnip and I spent a lot of the morning/early afternoon at the beach where we were too busy enjoying ourselves to take pictures.

Our morning started like any other, Daily News Café for our complementary breakfast followed by a jaunt on the beach.

After we were done digesting our generously portioned breakfast (and my laptop battery was dying), we went back to the hotel to change into our swim gear. We checked out beach towels at the hotel this time, and got our usual beach chairs & boogie board combo. There aren’t too many pictures of this beach trip as we took a ton last time, so I was just focused on having fun. While I was in the water and Katnip decided to take a break, I met this guy that taught me how to correctly catch the waves with the boogie board. After that, being in the ocean got a lot more fun. Eric Boekeloo, or as twin and I like to call him Brother in Alphonse’s voice from Full-Metal Alchemist, showed up and joined me in the water. I taught him the secrets that had been unveiled unto me and we spent the next few hours catching waves. I ended up very sunburned and the boogie board didn’t help too much with not turning my abdomen red. It was a lot of fun though. We were probably in that salt water for a good one or two hours just catching waves and swimming back out only to rinse and repeat.

After we had enough, we headed back to the hotel to get cleaned up for dinner with Mary Lin. She had freed some time up in her schedule so that she and her boyfriend could come up and have dinner with us. We headed back to the hotel when my cousin Yvonne had just arrived. We showered and got dressed, but Mary wasn’t around yet we explored the town where I once again insisted that we get Jamba Juice. 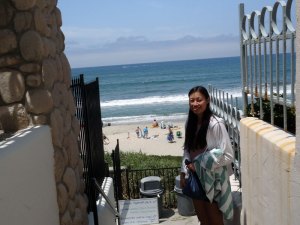 When Mary arrived, she wanted a quick tour that we were happy to give her. Then she took us to Cardiff-by-the-see where she had planned for us to have dinner at Besta-wan Pizza House. We ordered the Besta-wan Special and the Banks Special. I was a pretty big fan of the Banks Special pizza. So delicious! We also ordered some pitchers of Fat Tire and Anchor Steam for the table. Overall dinner was hilarious, everyone had great conversation, and not once did anyone interrupt with texting or a phone call as is so common this day and age. I stole the check because all these wonderful friends drove a fair distance to come see me and hang out with me, in Mary’s case she picked us up from the airport and dropped us off only to drive straight back to work. After dinner Mary wanted to stop by the bakery, so we went in and she ended up buying a dozen macaroons and I got a cookie. After our bakery mis-adventures, they had to head home and we headed back to the hotel where we were waiting for Brad to arrive from Los Angeles to hang out with us. 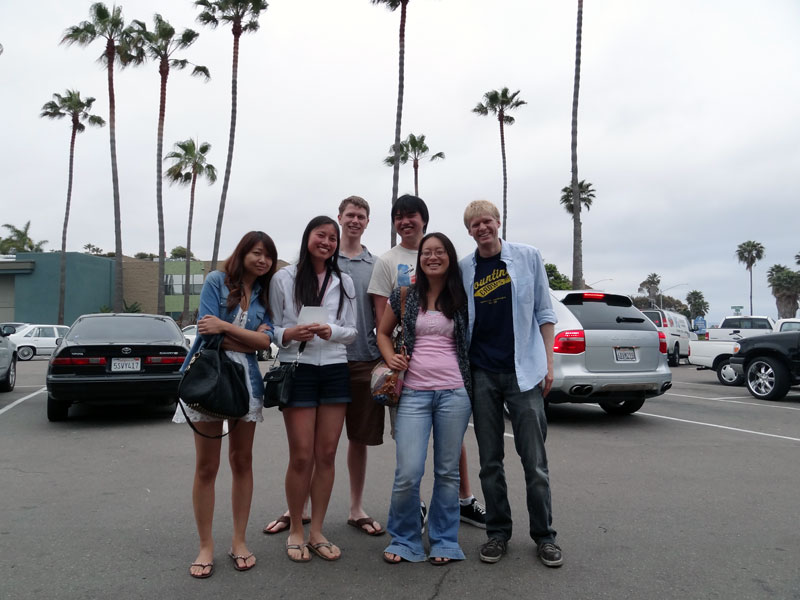 Brad arrived with some Shock Tops for everyone to enjoy. We decided to move the hanging out from our suite to the beach where we could enjoy our last night by the ocean. We brought our towels and we sat around talking, playing, and some drinking. It was great to see Brad again. He doesn’t really do any social media, so seeing him that weekend was especially special. He had driven a long way just to come see me and we had a great time that night just hanging out and shooting the shit. He’s one my oldest and dearest friends, and I’m glad that we are still in contact and still get to hang out. Eric had to go at about 1 AM, and at that point we packed it up from the beach but Yvonne was hungry. So we decided to go to Senor Grubby’s for some tacos. They were delicious. I regret not getting more. This past week I was with John and I was really craving some tacos that were similarly made. Alas there was no good substitution. When all was said and done, we went back to the hotel where Brad stayed the night given the late hour and long drive.

The end to another awesome day.

2 thoughts on “Last day in Carlsbad”