So as some of you may know, I am now a homeowner. After moving in and getting stuff settled, the next most important thing had to be planned – the housewarming party!

The holiday weekend saw a lot of people returning to the mitten to visit/celebrate with friends and family. I took advantage of this fact and held my party the Saturday following the Fourth of July. I was able to catch a lot of people that were not busy due to the holiday weekend, and also those that just so happened to be in town to relax. I even got some of my longtime family friends and pre-college friends to show up! It was a great reunion and I was so happy to see everyone. I wish I had more time to talk to everyone, but guess that’ll have to wait until the next gathering I hold.

Cards against humanity dominated the early part of the party, but when the basement (and my lack of AC) started to overheat the room people began dispersing to the breezeway, outside, the living room, and the patio. Kings was played/taught, and I realized I need to make a poster that posts the house rules for some drinking games.

At some point jello shots, pudding shots, and gladiator shotguns were done throughout the night. By far the best part of the gladiator shotgun, was Ellen teasing Chris that she beat him. It was great.

A two-headed dragon game of Magic: The Gathering was also played, and I wish I could have watched. Unfortunately I only caught glimpses of it as I was running around talking to people, making sure everyone was alright, and all-in-all trying to be a good host.

Eventually Pat and Jill talked us into playing a game that was taught to them by an Australian guy they met. It was explained to them that the game was “LIKE A VELODROME!” Will and I shared the same confused look when this was said, but after Pat’s explanation was through the quarters with ping pong balls game was revealed to be Slap Cup. This has now become my official house game, but it will heretofore be known as “The Velodrome”. I will hopefully have a wooden sign to hang in my breezeway (which will be its official arena) to signify it.

So now I have an official drinking game for the house, and the house song is Eurythmics – Sweet Dreams because of a cassette we found in the stereo that was left here.

Overall the party was a huge success, a good portion of people left around midnight because they had to drive home. Almost all of the people left stayed the night. As the night continued, people slowly dropped out of the party to sleep and pass out. By the end, the handful of us left were up until 5 AM before we decided we should get SOME shut-eye. 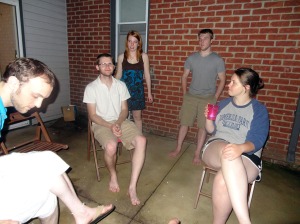 It was a great night, and I hope to have many more like it.