So after Cask Fest I started falling behind in my blog post writing. Between the vacation I took to Indiana and working towards finishing my master’s thesis by May 31st, my time started to become very limited. The first thing to go was the video games followed by the blog posts, so I apologize for my absence. But now that everything is finished I can finally do whatever without feeling guilty that my thesis isn’t done.

Before Jimmy had left, he had mentioned that there was a huge BBQ fest near his parents’. Keeping this in mind since his departure, I wrangled a handful of friends and convinced them to go to Indiana with me for this culinary expedition. Jimmy lives in southern Indiana, near Kentucky. This is about a 7 hour drive, so we had a nice road trip through Ohio, Kentucky, and the southern tip of Indiana. Two of our group left from Urbana-Champagn, Illinois and the other five of us road-tripped down from my place.

Sarah, John and I rotated driving duties on our way down, and our stops at eateries on the way marked when we rotated who was driving. On our way down, we stopped for a late lunch at Taqueria Mixteca. We found all the restaurants during our travels via Yelp, and after verifying how delicious the food was they were became believers in its effectiveness.

After Mexican, John took over driving duties and we continued on our way to Louisville. We got there in the evening and stopped for some more food. We ended up eating at The Fish House/Cafe Beignet for dinner. What started out as a snack, ended up becoming a fairly filling dinner.

We headed back on our way again and I took up the mantle of driver. The last leg of the trip went smoothly as we arrived at Jimmy’s to a fire, s’mores, and a warm welcome.

Luke and Riley came in from Champagne and they arrived a few hours after us. Everyone hung out around the fire while making marshmallows and s’mores. A group of us stayed up until about 4 AM drinking and talking around the fire. A few people continued being awake until the sun rose in the East. The later it got the more shenanigans occurred. It was a fantastic night.

The next morning, we had to wake up early to head to Mammoth Caves. Jimmy and I woke up in a puddle of water, as it had been raining water had gotten between the bottom of the tent and the tarp. Was an interesting and cold way to awaken. In any case we got up and everyone prepared for our cave adventure. After we finished spelunking, we hung out at the Downs’ and relaxed a bit while some people showered and others rode on a go-kart. Sarah and Ellen had never driven a go-kart before so it was a lot of fun for them.

After everyone was relaxed and clean, we headed out to BBQ Fest in Owensboro for dinner. After gorging ourselves, we headed back to Chez Downs and enjoyed the fire pit and some more s’mores. This was probably my favorite night because while the past day and a half had been a lot more clique-y, everyone started mingling/talking with everyone else around the fire. Jimmy’s friend Jennifer came over to hang out as well. It was a fantastic ending to an fun and eventful day. Slowly everyone retired to bed one-by-one, Luke and Riley slept in their truck, while the rest of us took up the tent again. We were pretty sure we weren’t going to wake up in a puddle from torrential downpour after moving the tent, so we slept pretty well. 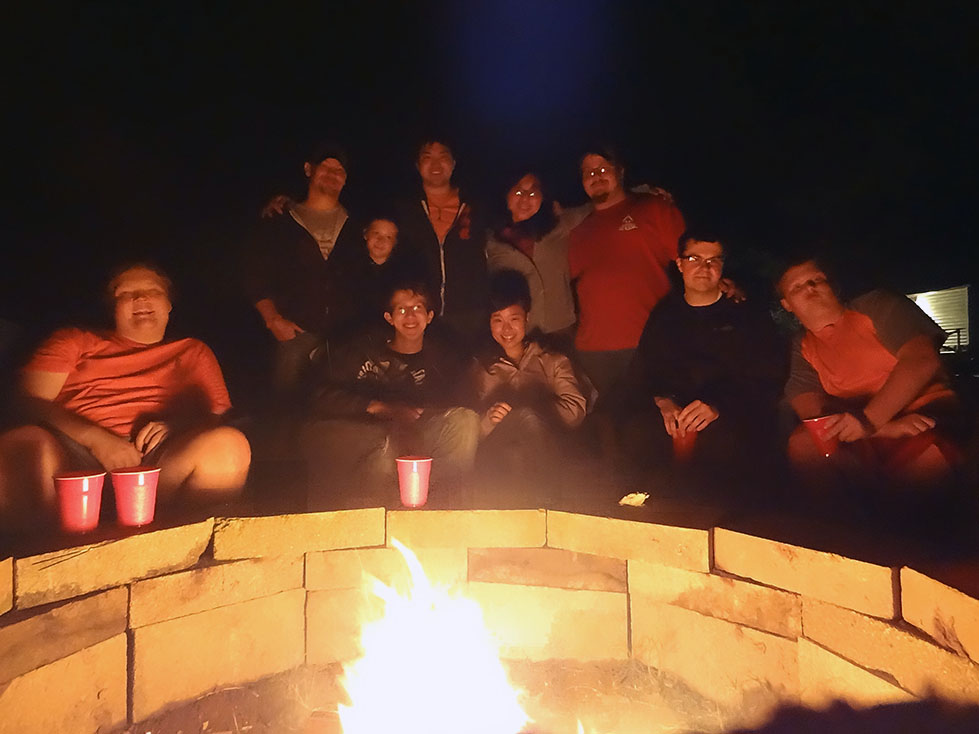 Then the morning comes. Luke & co. had to depart in order to catch their family for Mother’s Day. After a hearty s’mores breakfast and some photo ops, they headed on back to the mitten. The rest of us made our way to Owensboro again for a second go at BBQ fest around lunchtime. Lori, Skyla, and the Dude went looking for B’day and Mother’s day gifts for her moms and on our way back, we helped check for a Wishing Well at Menards for Mama Downs. 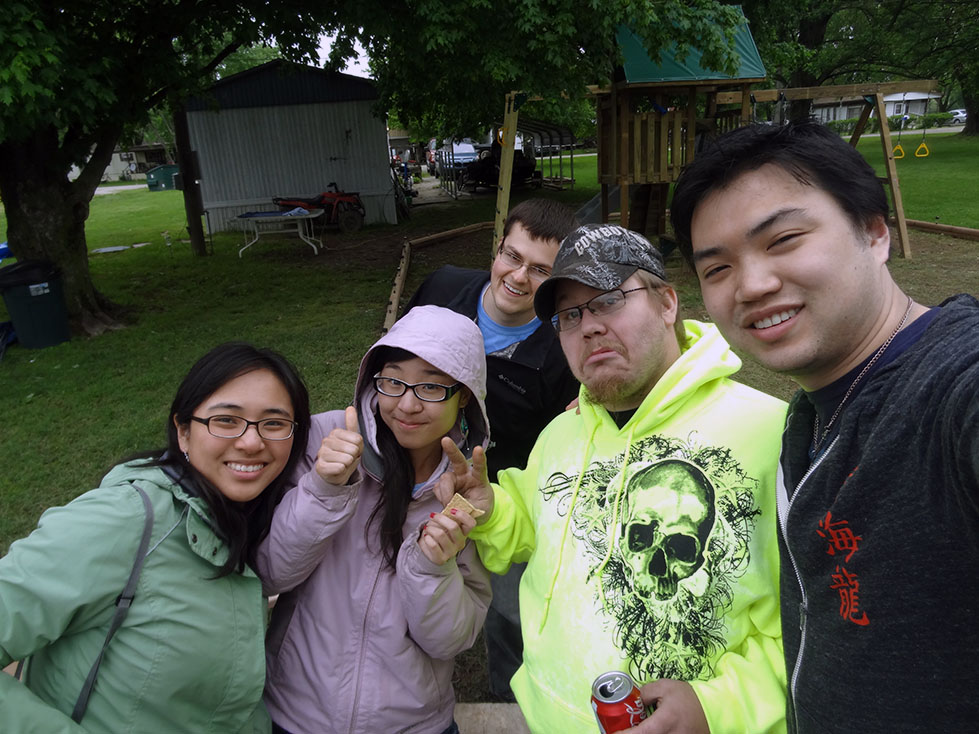 Whilst looking, I wondered why we didn’t just make one. I mean, I knew that Jimmy had tools at his house, and as far as I could tell wishing wells were made via stone and wood. And the stones just had to be piled up to look like a well. So I suggested it to Jimmy, who relayed it to Lori who loved the idea. So I got to use some new power tools on this trip – a miter saw, a handheld bandsaw, and a pneumatic air gun! It was super fun.

We got most of it done, before we started on dinner. On our way home we had bought some steaks, veggies, bacon, and shrimp. I endeavored to make bacon-wrapped shrimp with this recipe. The marinade turned out really well, but the grill was preoccupied so I thought using the firepit to cook the shrimp would be fun/the same. While it worked, the skewers were too short and it took too long to guarantee the shrimp were fully cooked. It was delicious though! Just was a pain to cook via fire.

As the night got colder, people started trickling inside to sleep. The girls thought it was too cold to sleep outside, so they slept in Skyla’s room while John took up quarters in Eli’s room. Skyla retreated into their tent, while Zack, Lori, and I sat outside talking in the warmth and glow of a the burning pallet. We had some good conversation before I also called it a night, and went inside to sleep on the couch.

In the morning I awoke to a Skyla at my feet watching TV. Followed shortly by a Jimmy, Zack, and Papa Downs asking me if I was ready to finishing putting the wood shake on the wishing well. That link is for other city boys that have no idea what it is. 🙂 So I headed outside in my PJs to work with power tools!

The time finally came for us to depart, and depart we did. While it is always sad to leave such good company and fun memories behind, we move forward knowing we’ll see them again. We set off to make it back to Michigan before the sun set, but managed to stop by at a little eatery (thanks to Yelp again!) in Louisville – Hillbilly Tea. 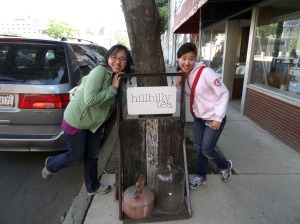 This has been one of the least expensive, and most fun vacations I’ve ever been on. Between the good eats, the great events, and the amazing people I got to be around I am definitely coming back as often as possible to hang out with Jimmy and crew. Usually I think I’m pretty good in terms of being acclimated to some features of more rural activities and being outdoors. A lot of my friends act heliophobic sometimes. I enjoy going camping, and playing outdoors and that sort of thing. But boy if I didn’t feel like a HUGE city boy while I was down there. One thing that I really am touched by is that Jimmy always says “you’re part of the family now.” I’ve had people say similar things to me in the past, but I’ve always just been like oh okay yeah we’re close friends. But something is different this time, I actually feel it this time. I have no explanation for this, but it gives me the warm fuzzies all over. So now I have two families, my suburban Asian family in Michigan, and my rural family in Indiana. 😀 How lucky am I?