During our stay in Indiana, we decided that since Mammoth caves was only 2 hours away, it would be a fun side-trip to visit before BBQfest started on May 10th. 8 of us piled into Lori and Zack’s Expedition, and the other 4 piled into Luke’s pickup for the 2 hour journey. Although nature tried to hinder us from exploring her cavernous wonders by making us drive through torrential rains (some might say monsoon), we made it to the national park in one piece. 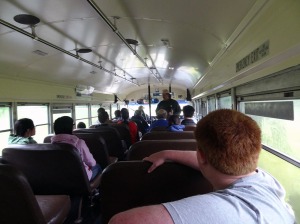 With a recommendation from Mama Downs, we decided to go on the snowball tour. This particular tour featured a little café at the end of the hike  where you could buy a box lunch and eat it down there, before you walked back along the trail. For the $8+ dollars that it cost, it  was pretty lame. I had envisioned like an underground bistro of some sort down there, but it turned out to just be some soup in a cup, and a white bread sandwich with a piece of ham or turkey inside. However, by the time we got there (we were the last tour) all that was left was ham, save for one turkey sandwich that the Dude took. He didn’t end up eating a lot of it, and Zack finished the sandwich (lucky bastard).

While the caves were pretty cool, I was hoping for a little more lee-way to free roam and take pictures.  I kept getting yelled at by the trailing ranger to not fall too far behind the group. The tour guide would periodically stop here and there to tell us about the history of the cave, and occasionally some geographical features that were located inside. Overall, I think a different tour might have been more interesting. The main attraction of this particular tour was the café and there wasn’t really anything too special about it. I think one of the cooler things that happened was when the guide shut off all the lights. I haven’t experienced such blackness before and boy was it eerie. So so very very eerie. I had thought about scaring my cousin when they did that, but I was afraid I would grab the wrong person and since there were some elderly people there, I thought inducing a heart attack to be unwise.

Despite the hangover that a lot of the guys had, and the, at times, boring tromp through the subterranean trail, it was definitely cool to go. I want to go on a different tour next time and see if the formations are more abundant or cooler. In any case, hope you enjoyed the pretty pictures!